The second iteration of a series of upcoming


. This time, we are putting a reworked crew mechanic system to the test:

If you would like to participate, download the Sandbox test server client and begin experimenting with the new feature. We need your support and feedback for the test to be a success.

But before you jump in, we would like to clarify several details, quell any concerns, and answer a few of your frequently asked questions.

1. Why did you decide against adding new perks and skills, as many players suggested, and opted for reworking the crew system?

The current crew system in the game has not been changed for a very long time (since 2012) and it became obvious that a number of mechanics and aspects of the crew system needed improvements and changes. The main directions in which we plan to develop the crew system are:

To bring these ideas to life, we looked at a number of solutions. In the end, they all turned out to be “half-measures” that didn’t radically change the situation. So, we decided not to focus on specific aspects, but to completely rework the current crew system.

2. Is there a release date?

There is no precise release date for Crew 2.0, at the moment. Currently, the most important and highest-priority task is to collect feedback from the players who tried out the suggested system in the Sandbox test. Play the game, share your feedback, complete questionnaires—your feedback will form the basis on which the future of Crew 2.0 will be built.

3. Can you briefly describe how the new crew system differs from the old one (i.e. Sixth Sense, variability, interfaces, etc.)

1. A vehicle’s crew will now be represented by a single Commander in the Garage, but everything will remain unchanged in battle.

2. The skill system has been reworked with Training Plans, new skills, and talents.

3. A new game entity (Instructors) has been added.

In addition to these changes, a number of aspects will become more comfortable and convenient for players—all Commanders will have the Sixth Sense perk by default, a crew will be able to “remember” up to 3 vehicles of the same nation and class, there will be a wide variety of skills as well as the ability to unlock and improve several skills at the same time, etc.

4. What will be automatically converted? 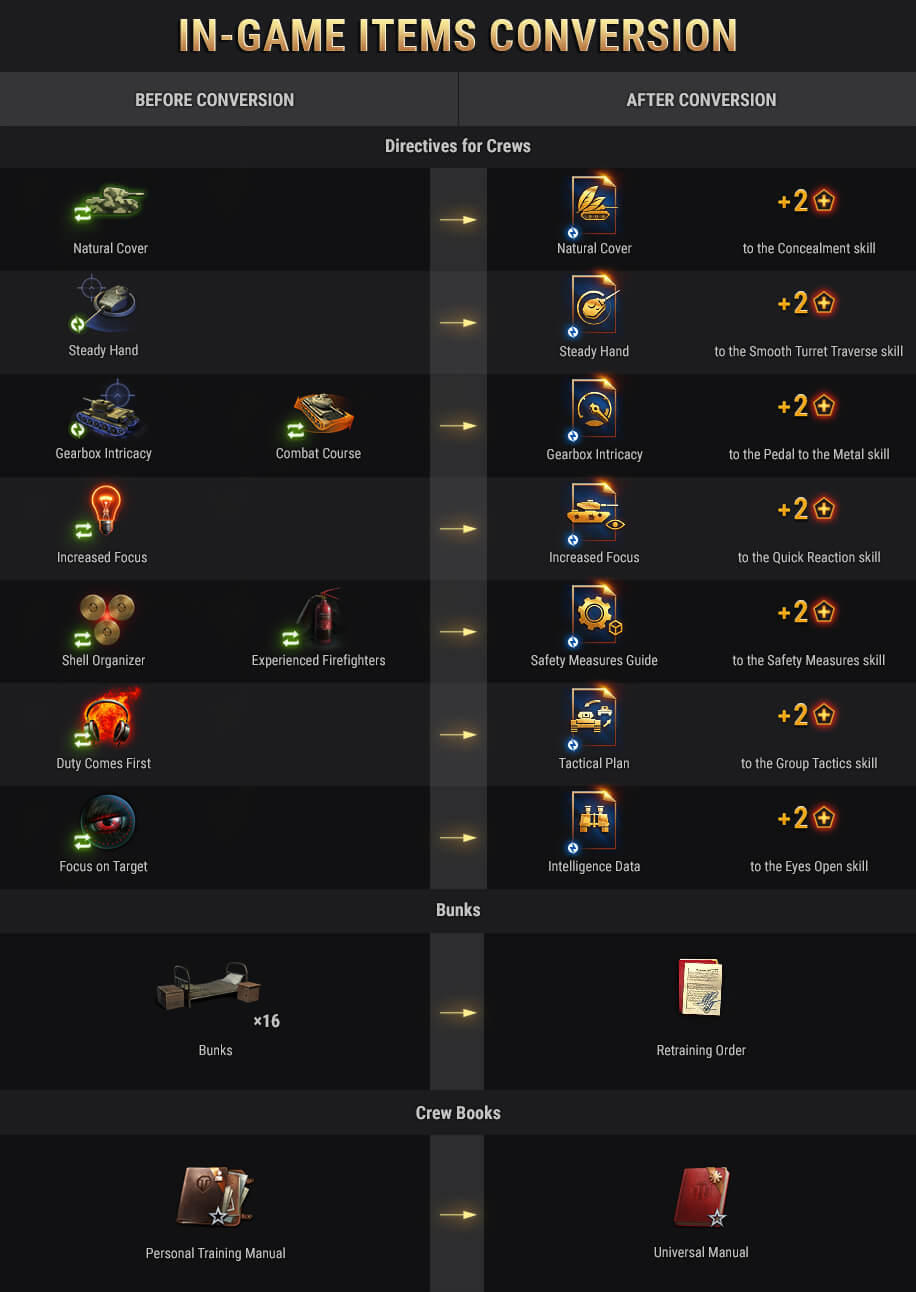 You can find more detailed information about the Crew Conversation Process


in the main guide

5. What will happen to unique crew members?

According to our concept, all special crew members (Snow Maidens, Chuck Norris, Battle Pass heroes, etc.) will become new valuable characters—Instructors. They will provide additional Skill Points (on top of the 10-point limit) to the crew and increase the experience earned after each battle.

6. What are Instructors and what bonuses do they provide?

All special crew members will be converted into new valuable game entities—Instructors. Up to four Instructors can be assigned to a crew. This functionality will be unlocked for free, as the crew levels up (at Levels 15, 30, 45, and 60). Instructors are divided into three Classes (III, II, and I). The higher the class, the more XP the crew gets per battle, and the more additional Skill Points are provided by the Instructor within the Training Plan. If a unique crew member had their own voiceover, the Instructor will keep it.

7. Why are conversion operations not automated, and how do I convert an old crew into a new one?

Crew conversion will be performed manually for each particular vehicle and players themselves will be involved in this process. It may not seem very convenient, but we do not want to make conversion-related decisions for you. Only players themselves should decide how to use such a valuable resource as Crew Experience.

When converting a crew manually, the total experience of all crew members in the vehicle will be divided by the number of members. As a result, the new crew will receive the average value of all experience earned by the old crew. Depending on the amount of experience, the new crew will immediately receive a certain Crew Level, as well as the benefits that correspond to it. This ensures that experienced crews will keep their experience in the new system.

8. How is the new amount of Crew XP calculated during conversion?

When converting a crew manually, the total experience of all crew members in the vehicle will be divided by the number of members. As a result, the new crew will receive the average value of all experience earned by the old crew.

9. What happens to my crew after conversion?

To find out the level of the crew after its conversion, enter the current number of skills/perks and the major qualification level for each crew member, and then click

You can find more detailed information about the conversion process


in the main guide

10. What are Training Plans and how do they work?

Training Plans are a matrix for distributing Skill Points. They include five directions:

Each course will comprise five skills and two talents. Players will increase the crew level by investing Skill Points. A total of 75 Points can be distributed in the matrix. Up to 10 Points can be invested into each skill.

11. What are talents and how do I unlock them?

A talent is a special type of skill that triggers in certain situations in battle. After investing 30 Skill Points in a specific Training Course, you will be able to choose one of the two talents available within that course.

Players can get points just like before, by earning XP in battles. However, now you do not increase the skill/perk level (%) by earning experience, but instead, receive points that can be invested in skills.

75 Skill Points is equivalent to the amount of XP required to train 5 skills/perks within the current crew system.

After investing 75 Skill Points in a Training Plan, you will no longer receive Skill Points, and the Elite Progression (Professional Expertise) will be unlocked for the Commander.

With each new level of Professional Expertise, the crew will receive a small increase to the vehicle handling level. However, for the most part, this is a token status for a well-trained crew.

15. Has anything changed in battle?

According to our calculations, the influence of a new crew on the gameplay will increase 1.5 times compared to the old crew. Additionally, a number of situational skills and talents will also be added. When triggered, they will be displayed in battle with special indicators.

16. What will happen to the Barracks?

Old experienced Reservists will stay in the Barracks, while crew members with insufficient experience to train at least one skill will be converted into Crew Books.

1. How do you participate?

2. What are the special missions and Tokens? What do you need to do in order to earn rewards for participating in the Sandbox test?

It’s quite simple. Six combat missions will be made available on the Sandbox server. Five of them are completed simultaneously and unlock access to the sixth one. The sequence can be completed three times.

An overview of the exact mission conditions is available in

Once a chain is complete, the missions will become available again, but not earlier than the next day.

Shortly after the Sandbox testing is over, the Tokens will be transferred to the main server and players will be able to spend them in a dedicated part of the in-game Store

. Don’t forget to spend your Tokens before the next test starts, or else they will be converted into credits at the rate of 1 Token =

3. When will accumulated Tokens be transferred to the main server?

Between 24 and 48 hours after the test is concluded. We will try to do it as quickly as possible and will notify you after the Tokens have been transferred to the main server.

4. Are the Tokens for each iteration counted separately, or is it possible to collect them and then spend them all at once on rewards during the last iteration?

All of the Tokens earned during a test iteration have to be spent before the next Sandbox stage begins. Tokens don’t stack, so don’t forget to choose a reward in the time between the tests.

5. When will we see the 2D style and decals?

We continue to work on the 2D style and additional decals right now. They are still being drawn, tested, and carefully prepared for presentation to the public. However, we can already show you the decal for the Crew 2.0 test: 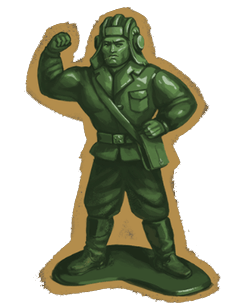 As for all the others, you will have to wait a little longer.

6. When and where will I receive the survey?

7. Why do we have to download the full Sandbox client every time?

This is the nature of the Sandbox server test. Each iteration means a separate client that was built for a new feature separately from other mechanics. Unfortunately, the production process requires this approach.


special missions on the Sandbox server 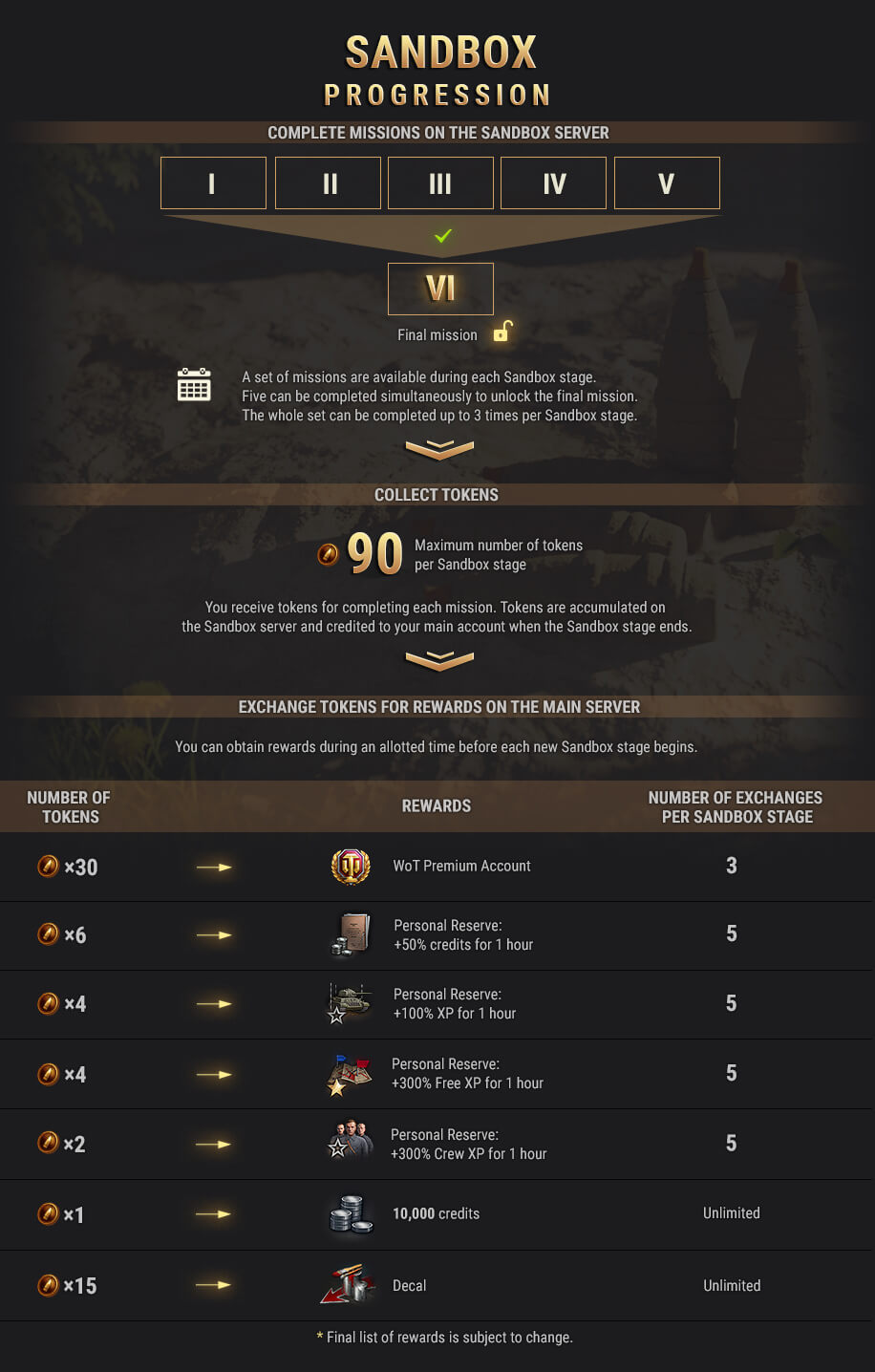 If you have any questions that have not been answered here, please

head over to our forum


where our community team will be happy to assist. You can find the link below.