Season 16 will stick to the traditional


The display of battles will become available at some point after the start of the event. Please keep an eye out for more news.

The nearest assigned battle on the Global Map is now displayed in the game client on the clan screen.

In addition, a list of upcoming clan battles with detailed descriptions is available.

In the list of battles, you can see the time and date of the battle, the name of the province, the map, and the base, as well as the opponent. Transition to the Global Map is available from this screen.

The page displays both assigned battles and planned ones.

Planned battles related to bids in auctions are displayed only to the clan officers who have the appropriate permissions. Once the auction has been calculated, the battle is displayed to the entire clan.

This data will allow all clan members to quickly receive information about the clan’s activity on the Global Map without leaving the game client.

In Season 16, players will have access to the Workshop where they can produce various rewards using resources earned from battles on the Global Map.

The amount of resources is the same for all team members and depends on the following factors:

• Clans earn more resources for a victory than for a defeat

• The more enemy vehicles they destroy, the more resources the clan will receive

Items that can be produced in the Workshop: 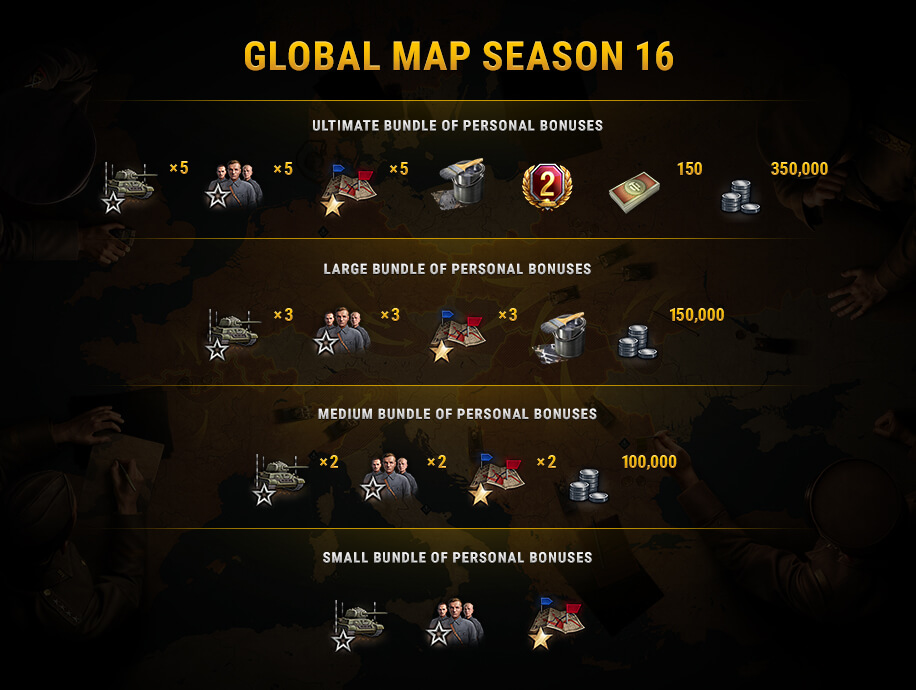 In the Workshop, players can find the battle log. It will display the amount of resources earned in all battles since the start of Season 16. The Workshop will be available until the end of the Season

. All unused resources and produced components will then be deducted.


Firefly provinces will again consist of


per time zone, and they will move


every week on Monday


Firefly provinces will be disabled


, but there will be a number of regular high-income provinces.

On March 28, the time changes to CEST, but don’t worry, the Prime Times will be adjusted accordingly too, so you don’t need to change anything on your side.

Regular, auction, and landing provinces will be available on the Global Map.


The battlefield is divided into zones with various levels of income, including provinces with no income.


There will be a total of


In Season 16, clans can earn a new set of rewards for the clan’s position in the Alley of Fame: