Time to highlight the most resplendent and kooky outfits in Crash and Coco’s wardrobes.

Everybody’s favorite Bandicoot spins onto PlayStation 5 today with Crash Bandicoot 4: It’s About Time. The dev team at Toys for Bob is thrilled about the improved graphics and performance, DualSense controller features, and all the other enhancements on the way. Of course, Crash and Coco also have a host of colorful skins fans can unlock by playing. To mark the occasion, I run down my favorite outfits from Crash 4, in no particular order. 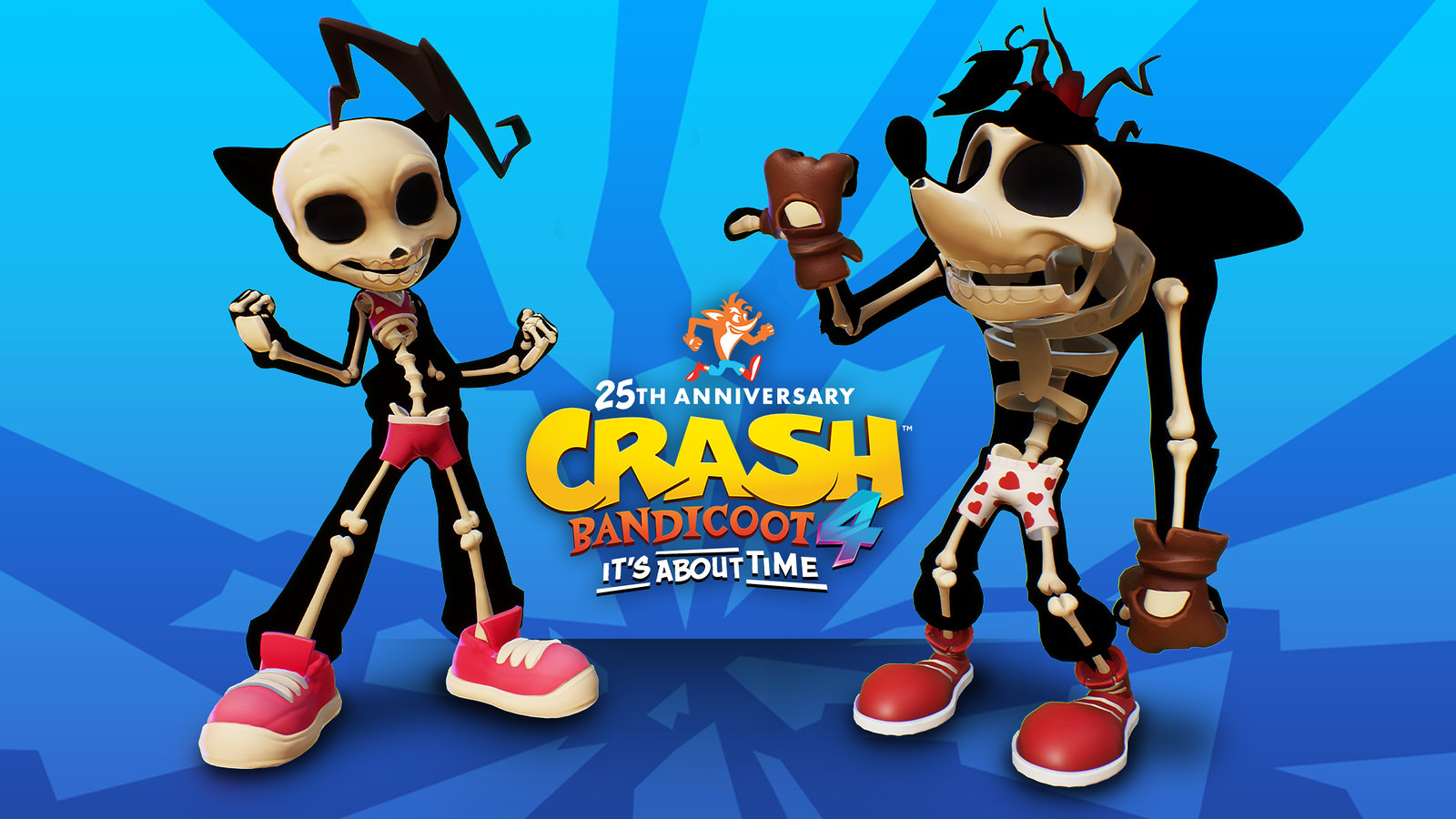 Also, in celebration of Crash Bandicoot’s 25

anniversary, with the franchise’s original entry launching all the way back on the original PlayStation in 1996, players can enjoy the Bare Bones skins in Crash Bandicoot 4, available for free upon completion of the game’s second level.

That, of course, is in addition to the Time Shattering skins that players can get first on PlayStation (pictured at the top of this article).*


Through the Ringer Crash


The inspiration for this one was how at the end of every Jackie Chan movie, there were always out takes and bloopers where you would get to see how injured Jackie would get pulling off these incredible stunts.  So, we thought it would be fun to award a skin upon completion of the main story, showing that Crash and Coco “went through the ringer” and came out the other end of this adventure a little worse for wear.  I think this one is hilarious, and the stickers the art team added to the casts push it over the top for me.


This Skin is one of the many skins we added in the game that touch on a reference or idea from previous Crash Bandicoot games, but with a fun, unique Toys for Bob spin.  The idea behind this one was a fun “what if” scenario – What If Neo Cortex Successfully trained Crash and Coco to lead his mutant armies? What would they look like?  The concept for this is just so much fun with the old-school evil villain details all over – I especially love the Neo Cortex “N” on the brim of the hat and Coco’s boots here.


The Chicken Suit Crash and Party Pony Coco skins were ideas that honestly came from throwing spaghetti at a wall, but we immediately saw them and thought they were hysterical.  As a set, I started to call them the “Party Animal” skins because they pair so well together.  That said, they almost didn’t make the cut as were originally planning on having every skin match up with the world setting that you unlock them in. We ended up having so many fun ideas that we freed up that restriction and immediately put these into production.


I want to give a shout out to our friends at Beenox for this skin.  When I first saw the concept for this, I immediately fell in love because of just how cool it was.  They just knocked the retro future vibe of this screen way out of the park with this one, and the colors are mesmerizing.  This skin really pops on screen whether you are playing in the neon N.Verted mode or in the regular adventure levels.


One of our mantras when making Crash Bandicoot 4 was to not treat Coco as a side-kick, but to ensure that she had equal billing with Crash.  So when we had the idea of having Crash’s iconic biker outfit (from the Crash Warped game cover) as a skin, we jumped at the chance to imagine what it would be like for Coco to have been the cover star of that game and give her an iconic biker look of her own.


Come on… do these need an explanation?  THEY ARE BALLOON ANIMALS! You can practically hear the squeaking just looking at them.  Fun fact… they have their own specific death animation.  Because really… how could we not pop them?


Similar to the General Rule Skin this is a look at what could have been. Some fans know that before he was called “Crash Bandicoot” he was initially thought up as “Willy the Wombat.”  That said, he didn’t really look any different, so we thought it would be a fun bit of speculation to dream up what a Willy the Wombat character would look like running alongside Crash Bandicoot.  We also then had a fun time imagining what Willy’s sister “Wanda the Wombat” would have looked like as well.  Who knows… maybe in an alternate dimension like the ones you explore in the game, these two are franchise mainstays.

Thanks for taking this journey through the lovingly crafted skins players can unlock in Crash 4. On behalf of the entire team at Toys for Bob, we hope you have a blast unlocking them all, and enjoy all the other benefits of playing Crash Bandicoot 4: It’s About Time.

Available now on PS5 and PS4


*Available upon completion of the game’s second level. Available on other platforms no earlier than December 31, 2021.