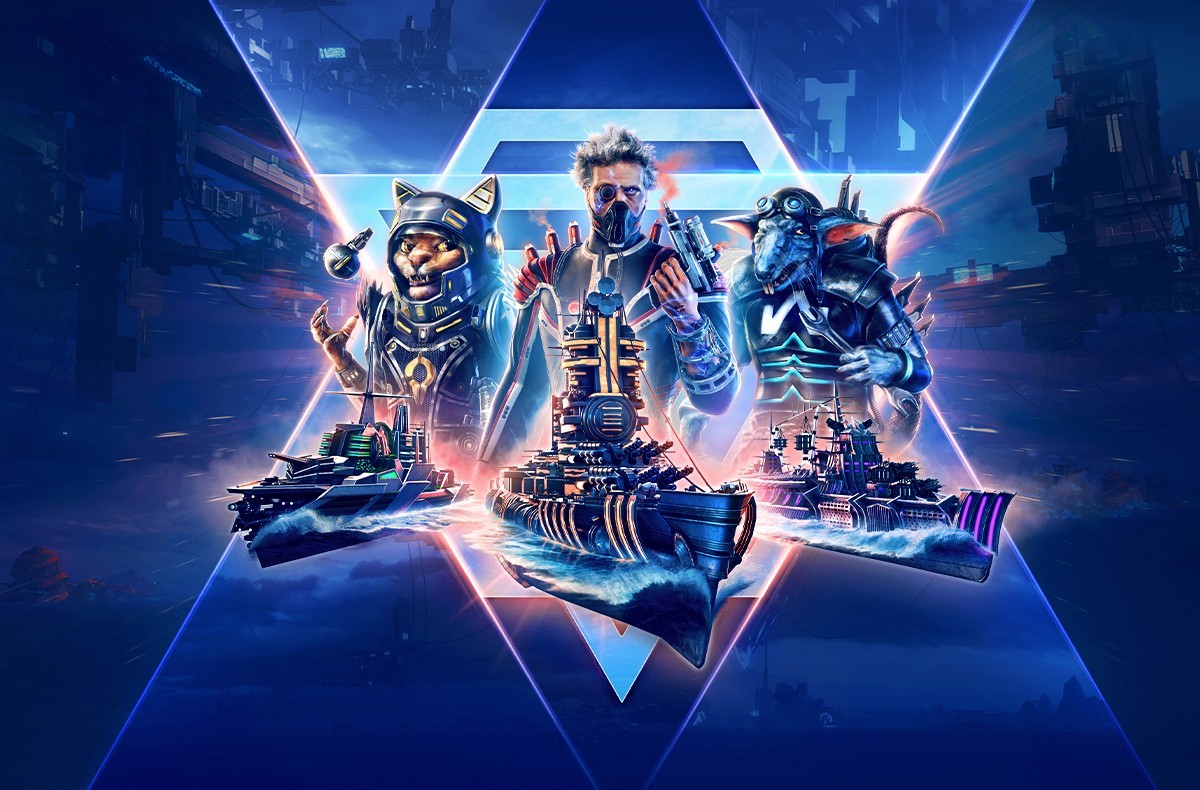 Things You Should Know

A new temporary battle type—Big Hunt—will be available to players in Update 0.10.2. It’s a revamped version of the Key Battle mode from Update 0.9.10. Team up, fight, earn Battle Points, and exchange them for rewards in the Armory.

The new battle type pits 16 players against each other and AI-controlled monsters on a gigantic Polygon map. 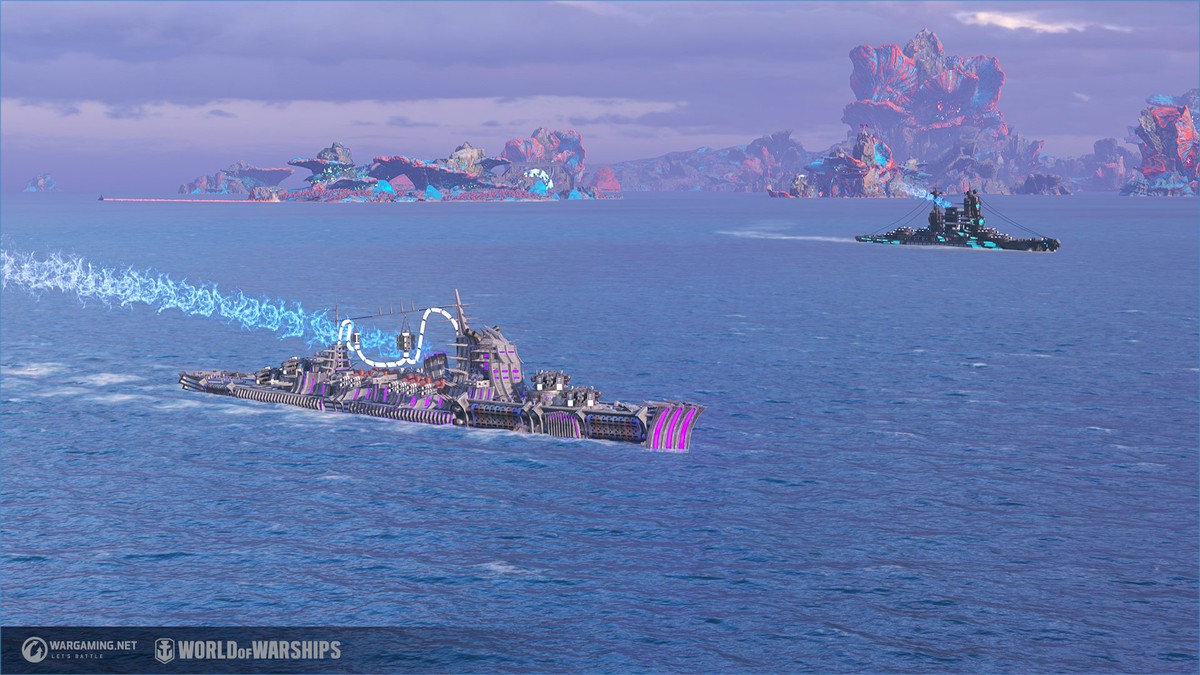 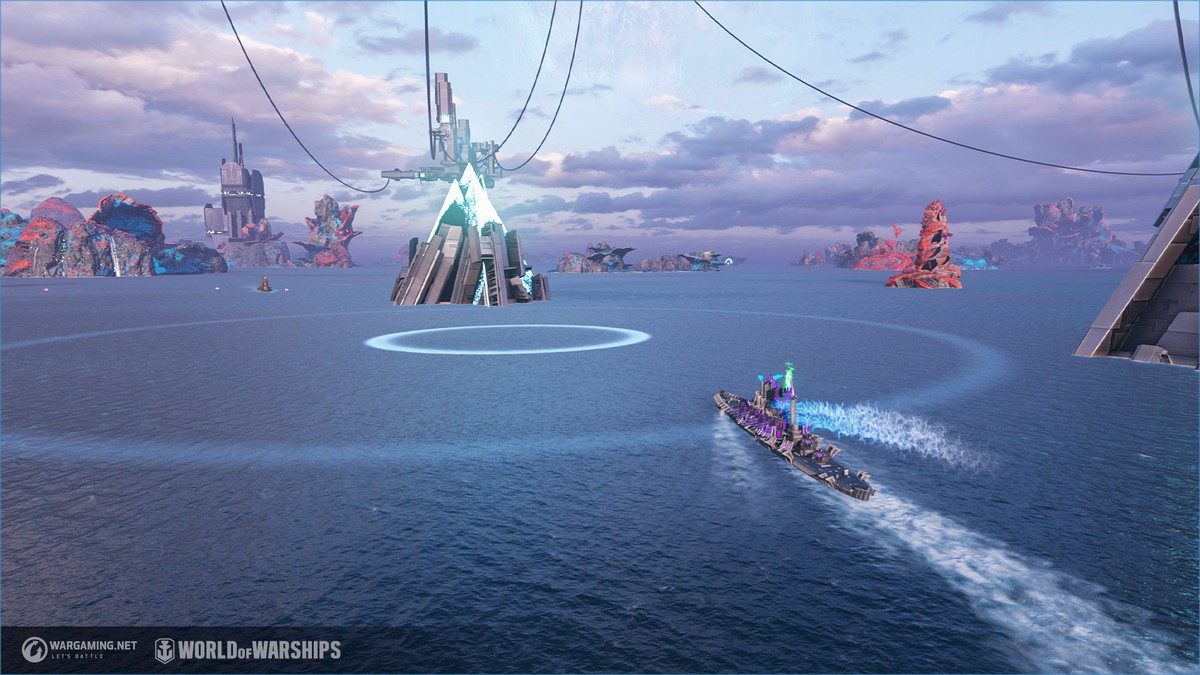 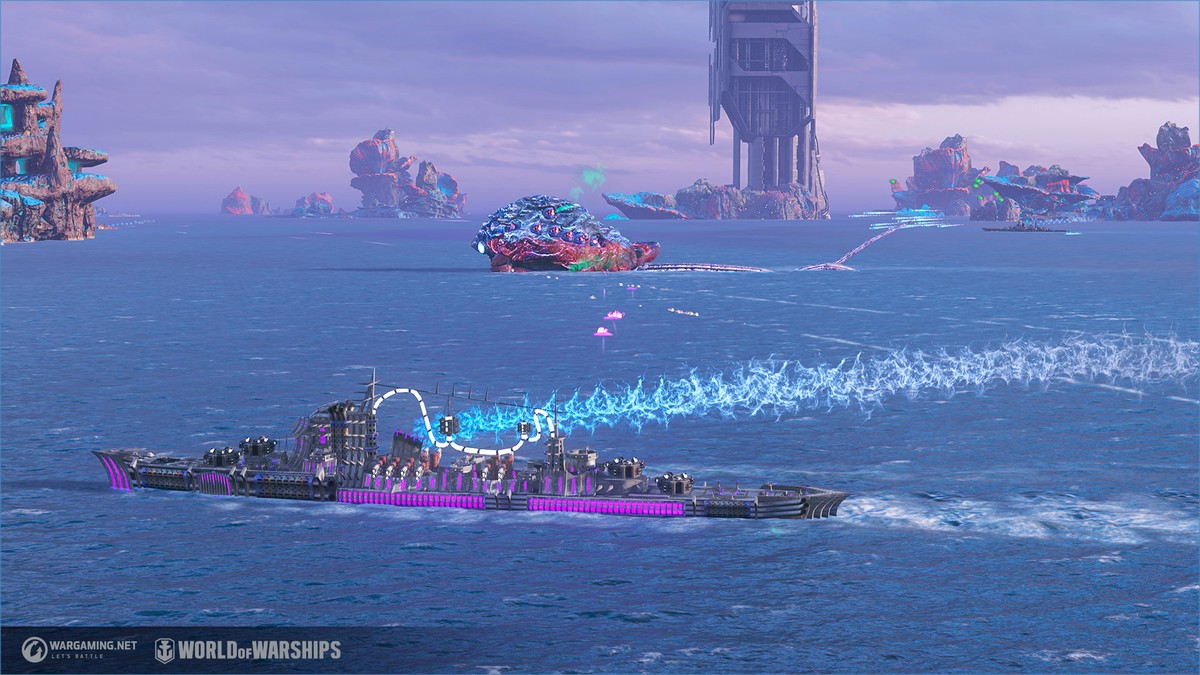 Battle Points—will be issued to players for destroying monsters and other players. 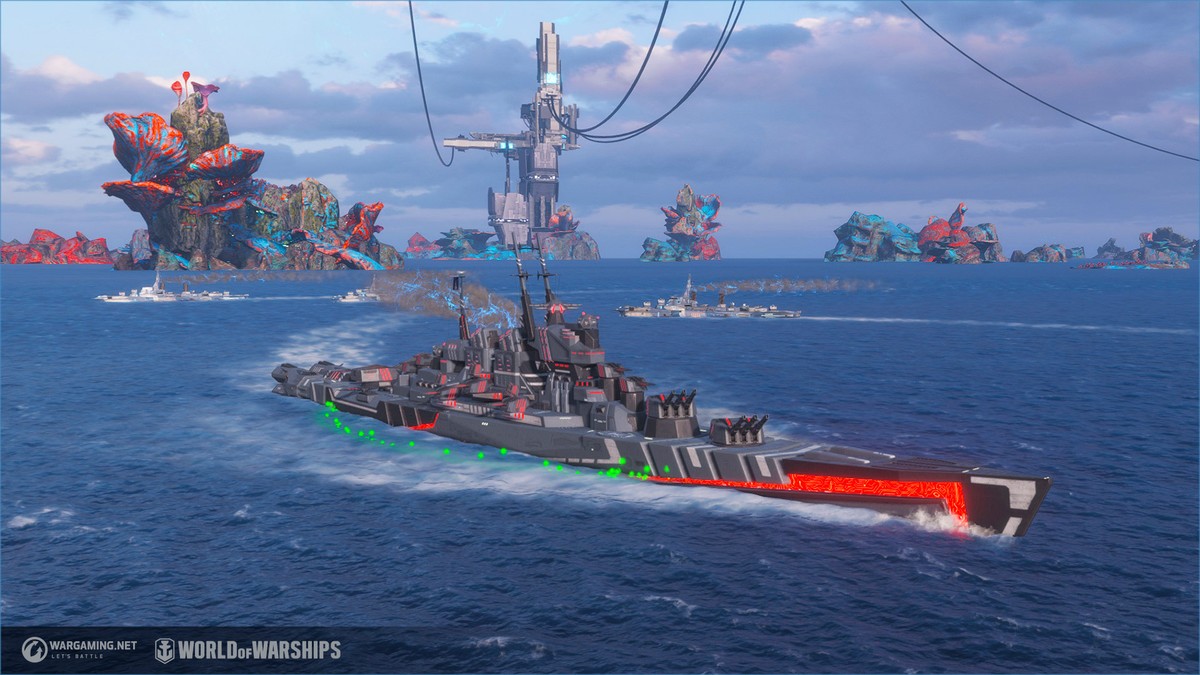 Each of the six available ships offers a wide variety of modules that can have a significant impact on gameplay.

The Big Hunt’s difficulty will intensify each week—the time it takes for the Portal to open and the monsters’ HP and damage (as well as the amount of Battle Points earned by destroying them!) will increase. The maximum size of teams will also increase—from three players in the first week, to six players in the fourth week. 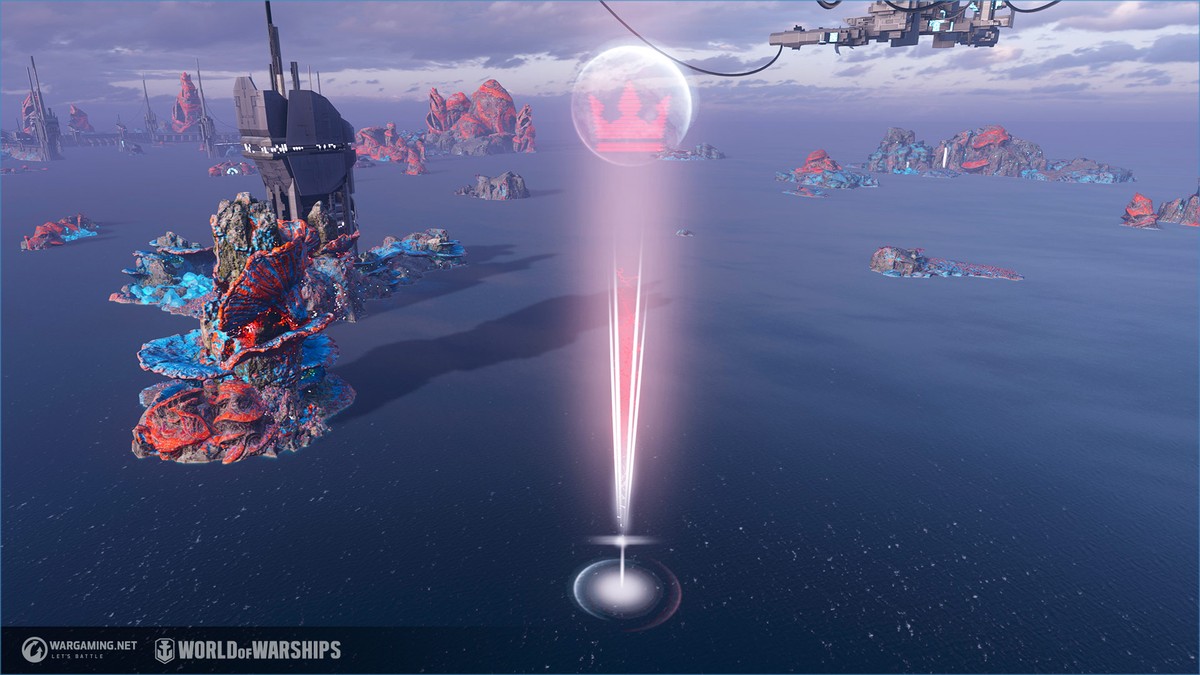 Earned Battle Points can be spent in the Armory to purchase three types of random bundles that include, among other things, a special temporary resource— 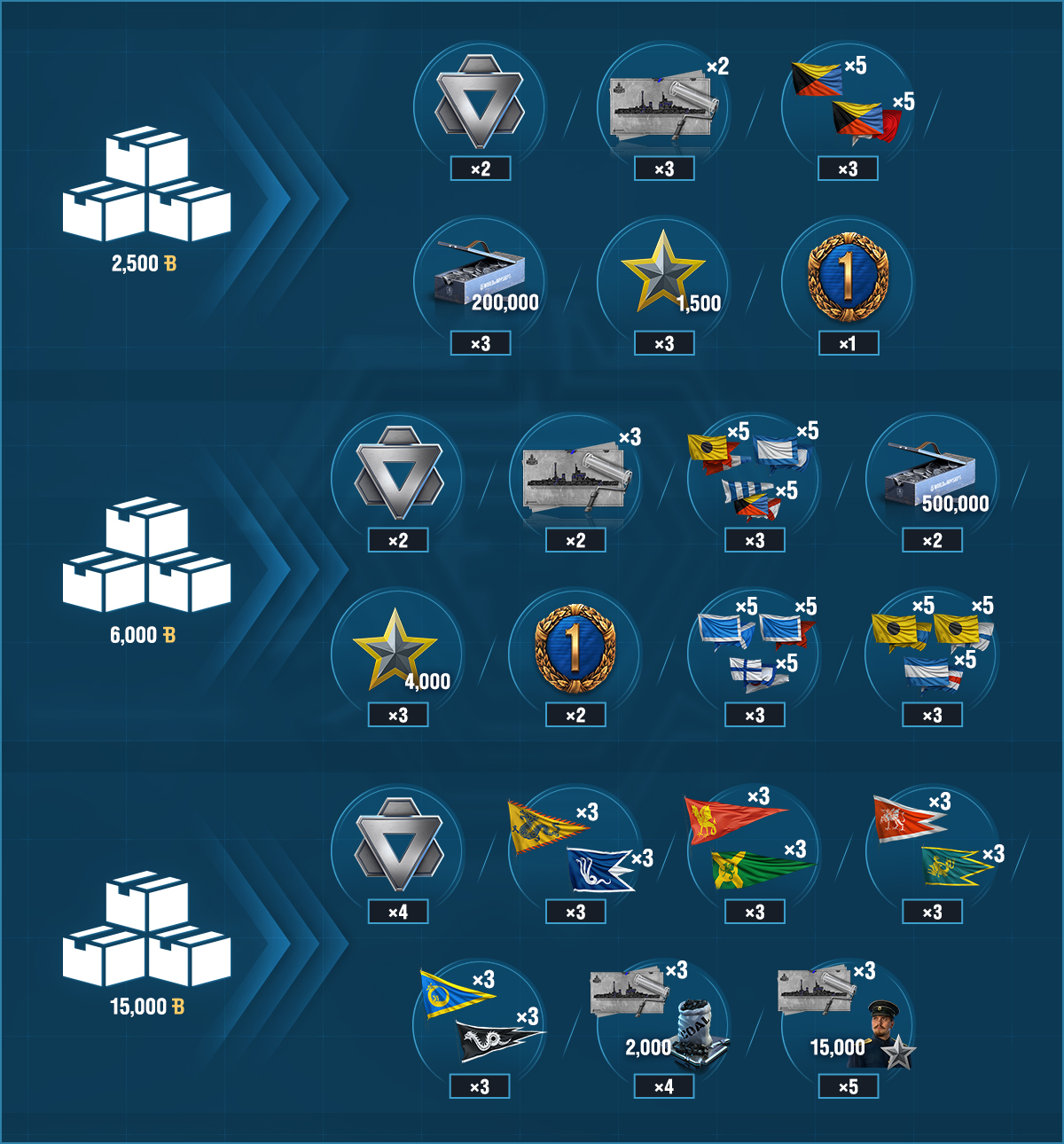 Corporation Tokens can be exchanged for themed permanent camouflages for

VIII Öland (5 Tokens each), or for Credits. 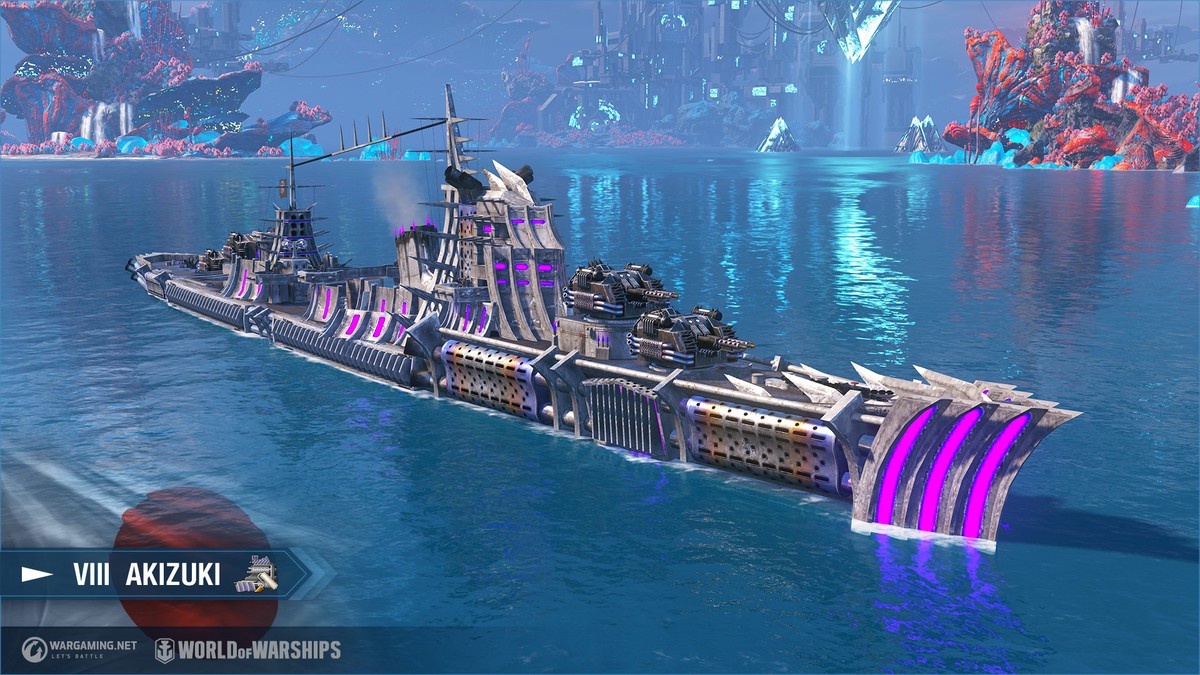 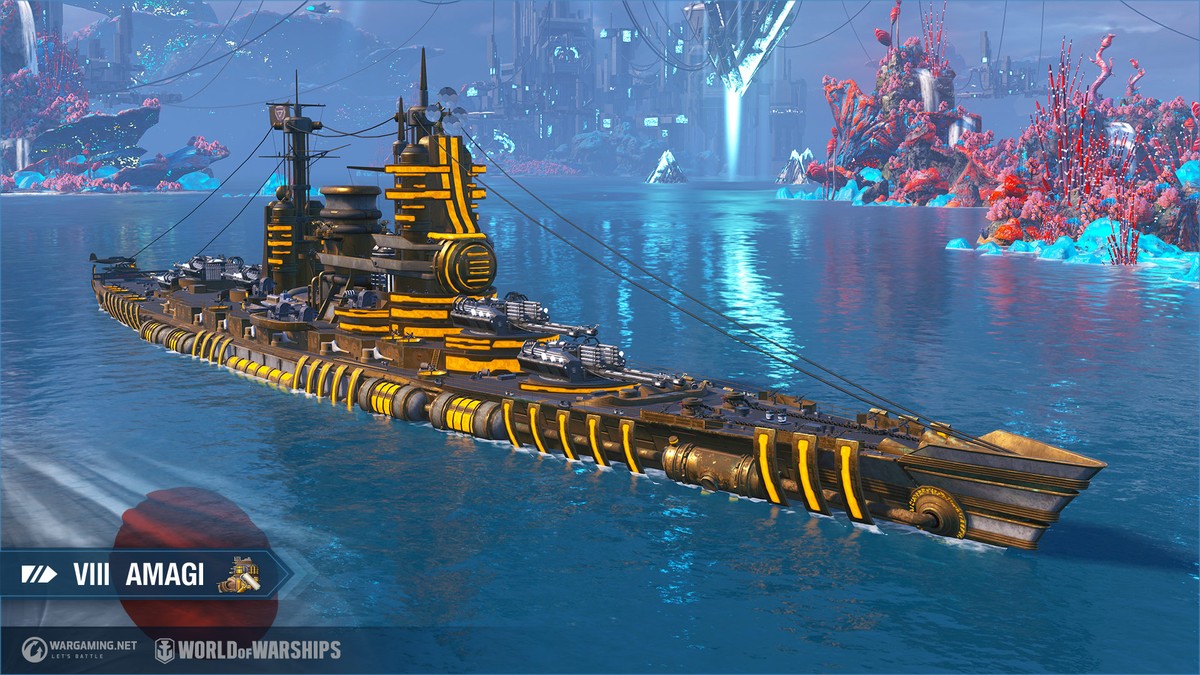 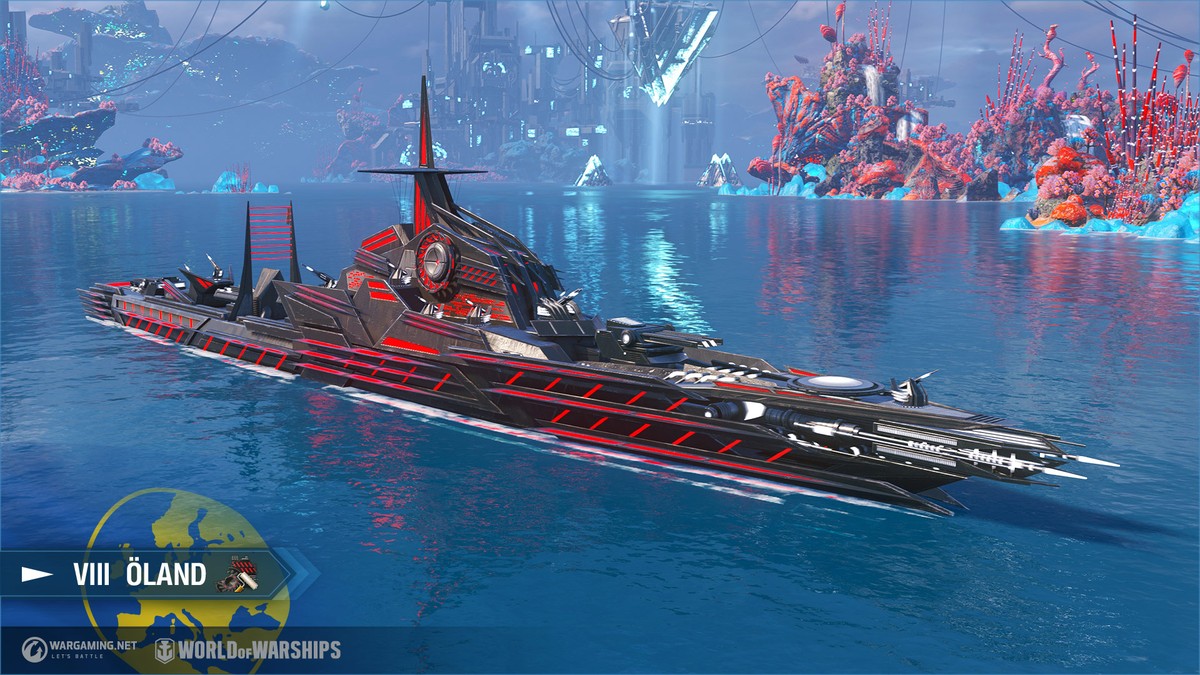 [/expand]
Apart from that, you can exchange Doubloons, Credits, and Free XP for bundles with Corporation Tokens and Coal in the Armory.

Outstanding successes in the Big Hunt will be rewarded with special themed achievements.

There’s Always a Way Out! — exit through the Portal in the Raid game mode.

Engineer of the Future — research all ships and modules in the Big Hunt event.

Breaking the Eighth Wall — visit the place of your past battles.

To access the Big Hunt, you must have fought at least 21 battles in the available battle types.

All 16 players begin each battle on the Polygon map alone, facing other players and AI-controlled monsters.

But you don’t have to fight alone—you can assemble a team directly in battle. To invite a player to your team, aim at them and press F. When you receive an invitation, the top of the screen displays who sent the invitation and how to accept or decline it.

You can also enter the Big Hunt in a Division. However, you still start the battle alone and need to locate each other on the map in order to team up. The possibility to place markers on the Minimap has been added. These markers will be visible to all team members and will help you coordinate your actions. 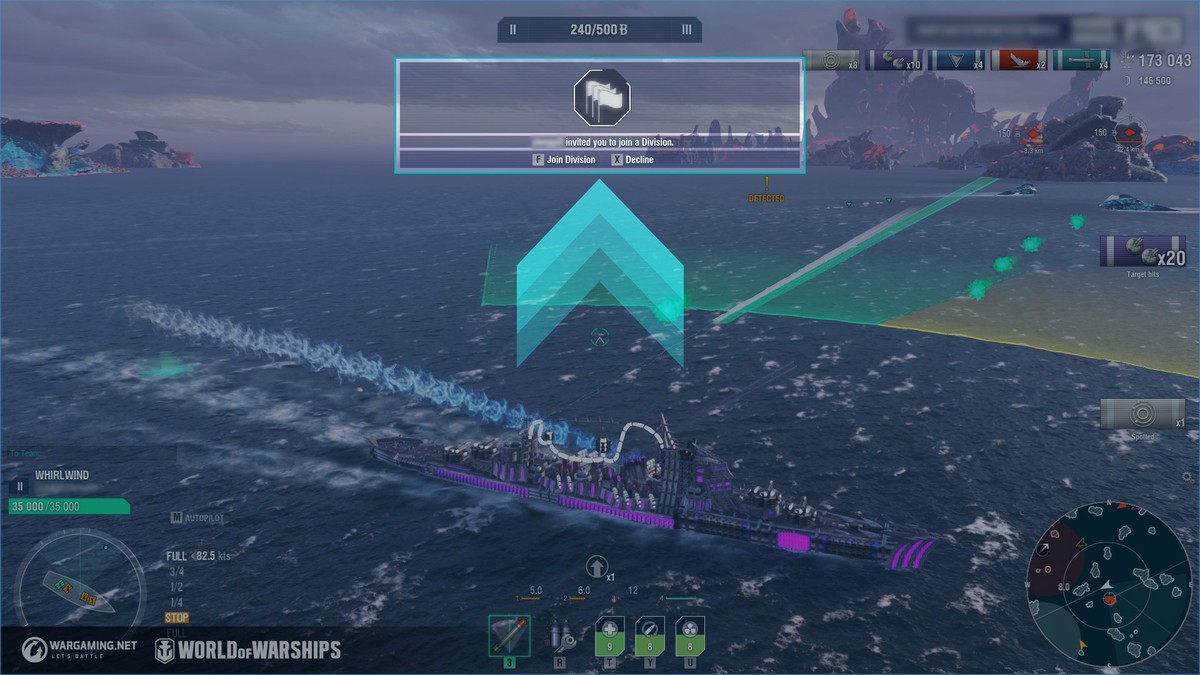 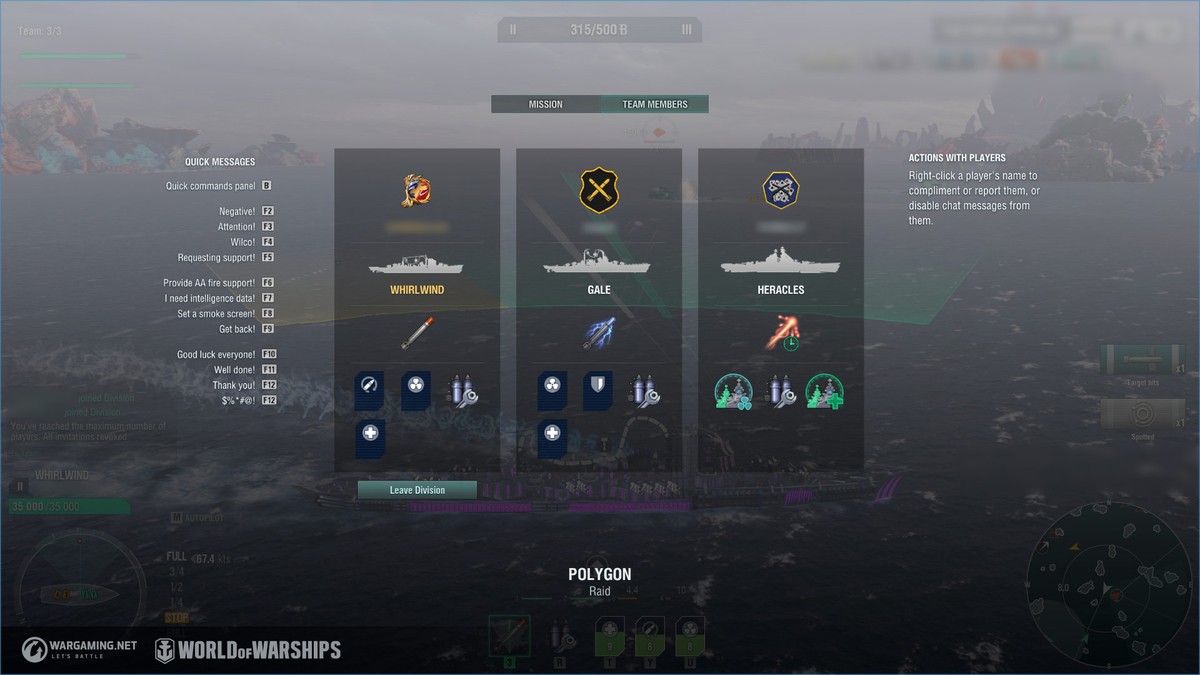 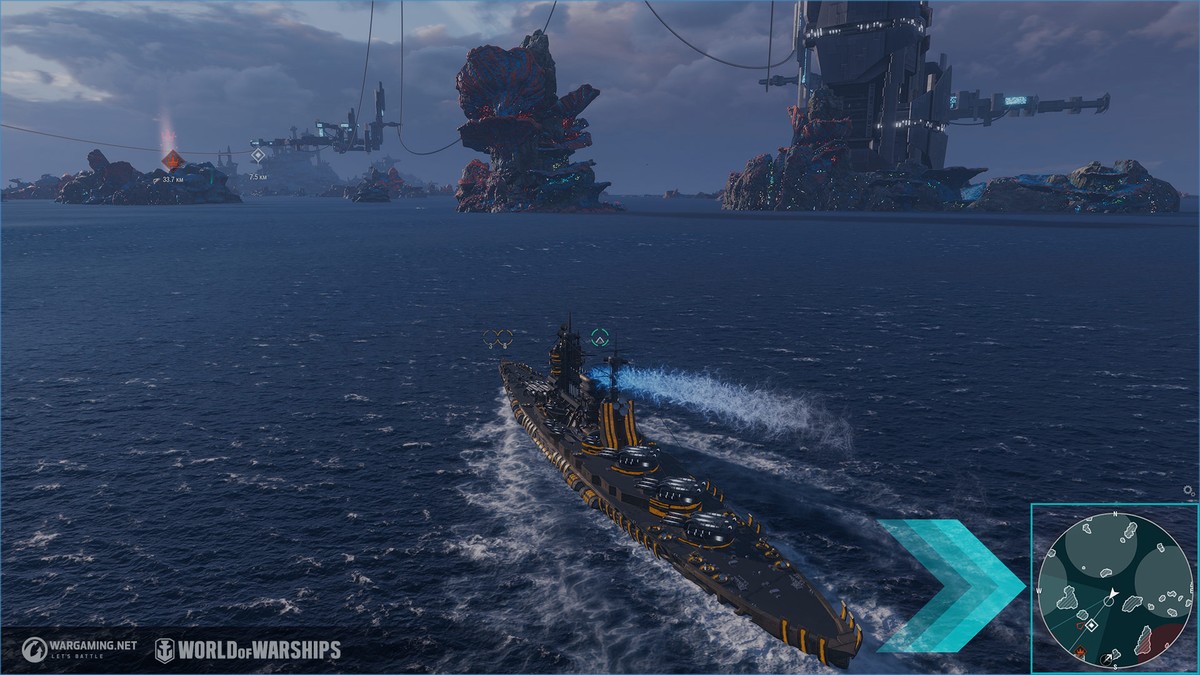 [/expand]
The main objective of the Big Hunt is to gather as many Battle Points as possible and exit the Polygon via the Portal. It’s closed at the beginning of a battle and you’ll only be able to enter it some time after the battle starts.

The Big Hunt ends when all surviving players exit via the Portal, or when the battle time expires. For this reason, it’s better not to stay too long in the Polygon—the Portal won’t stay open forever and, as the battle nears its end, AI-controlled ships of the Terra Corporation will start hunting down any remaining players.

You can earn Battle Points by destroying monsters and other players’ ships. Aurora, the new boss ship created by the Terra Corporation, will bring you the most points. Be careful though, vanquishing Aurora and her escorts will not be easy, even with a team.

Having accrued enough Battle Points, you can reinforce your ship directly in battle. To select one of the two improvements, use Ctrl+1 and Ctrl+2, or Ctrl +

on the preferred improvement. You don’t spend any Battle Points in the process of improving your ship, so make sure to reinforce your ship as soon as you’re able! Any Points you earn can be exchanged for rewards in the Armory after the battle. 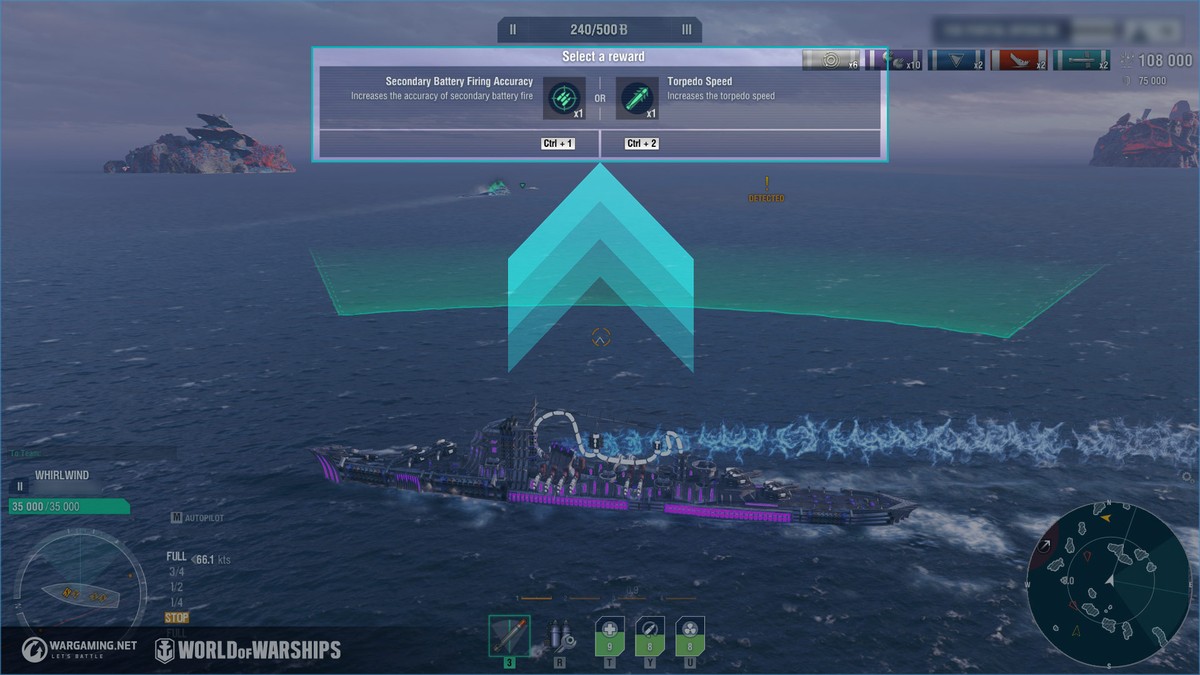 While you’re part of the same team, you can’t deal damage to your allies, and all earned Points are divided equally.

By exiting via the Portal, you’ll double your earned Battle Points. If you don’t escape the Polygon, you’ll still get any Battle Points you’ve accrued in battle. In total, you can earn up to 10,000 Battle Points in a single battle.

Apart from that, another special combat mission will require you to deal damage to enemies in the Big Hunt. The reward for completing it comes in the form of XP that will be counted towards the daily container progress. This mission can be completed an unlimited number of times. Once the event is over, any XP earned while playing the special ships will be transferred to Tier I cruiser Orlan.

More details about the combat missions will be available in the game client when the Update has gone live.

In total, six special ships for the Big Hunt will be available in Update 0.10.2. Each ship has access to a wide variety of modules that can have a significant impact on gameplay and your ship’s appearance.

IX Heracles, which are probably familiar to you from the Key Battle, will be available in your Port immediately with all of their modules researched. Three powerful new ships— 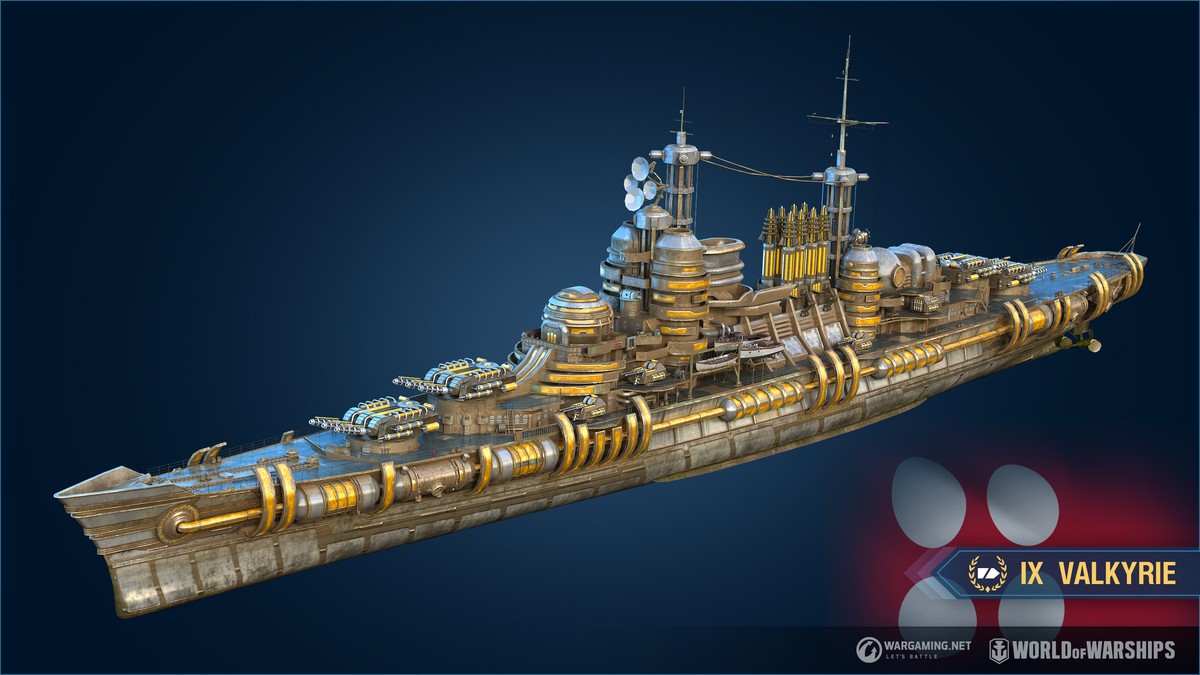 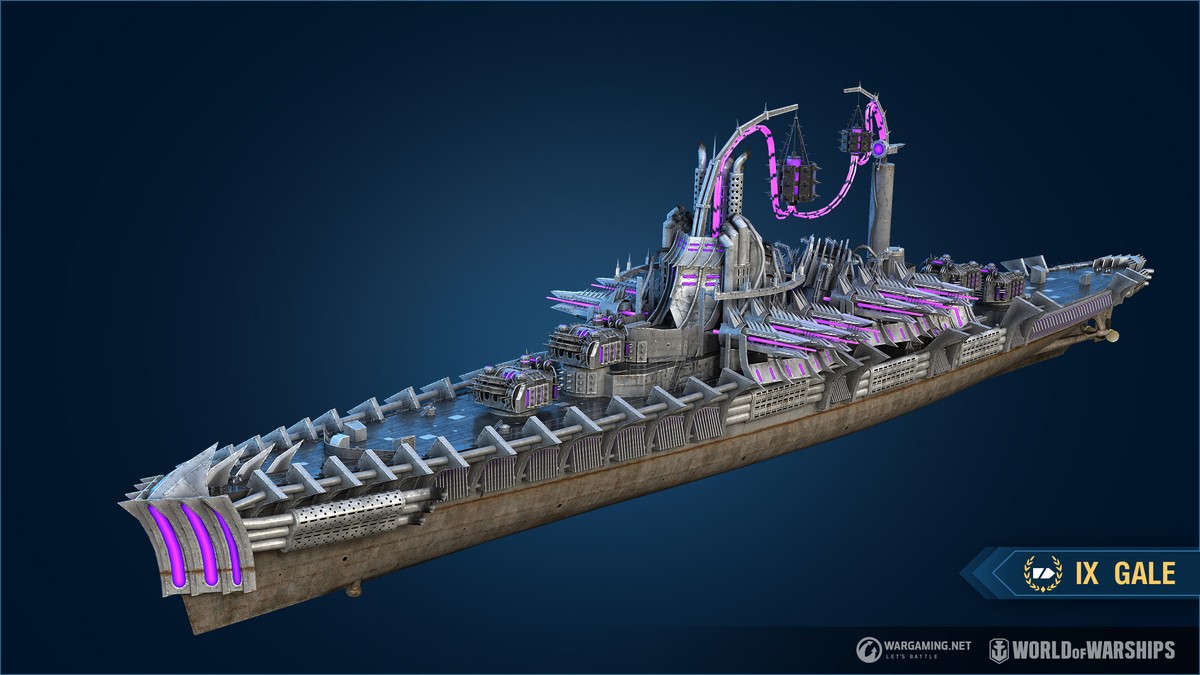 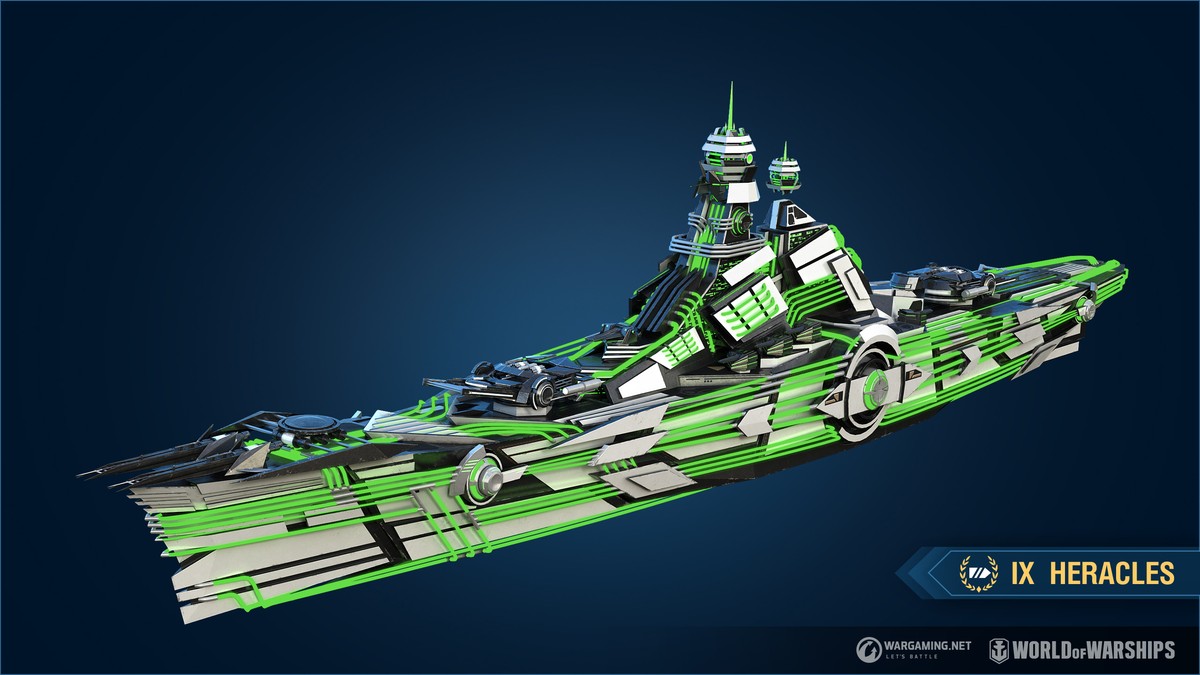 [/expand]
In addition to the new ships, completing combat missions will also unlock new hull modules, primary and auxiliary armaments, and a special module that changes the ship’s consumables.

More details about ships and armaments will be available in the game client when the Update has gone live. 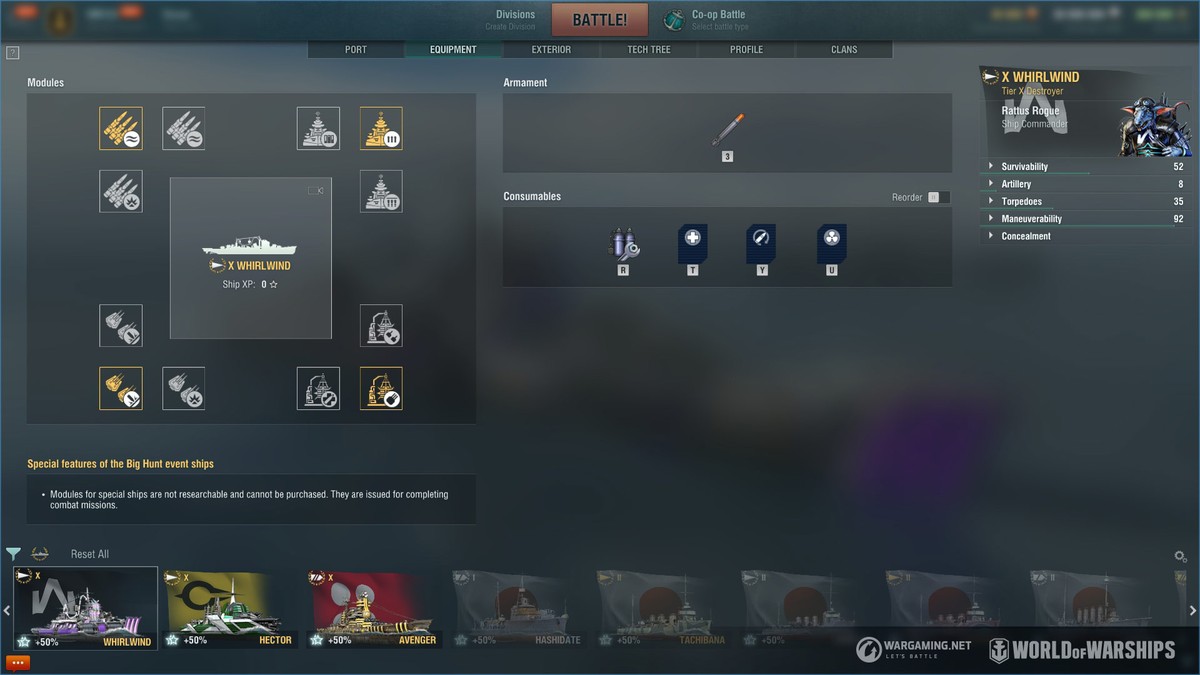 Commander skills, camouflages, and signals are disabled in the Big Hunt.

Her well-armored hull reliably protects her against enemy torpedoes, while she can be additionally equipped with large-caliber mortars that have a colossal damage radius. 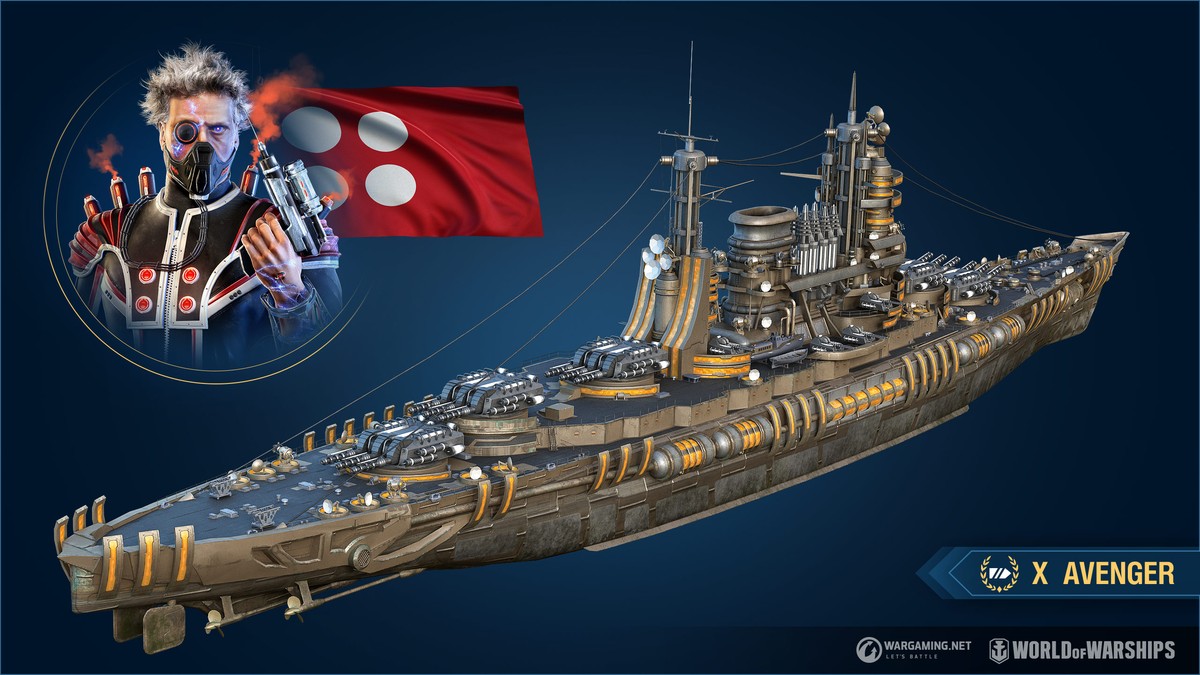 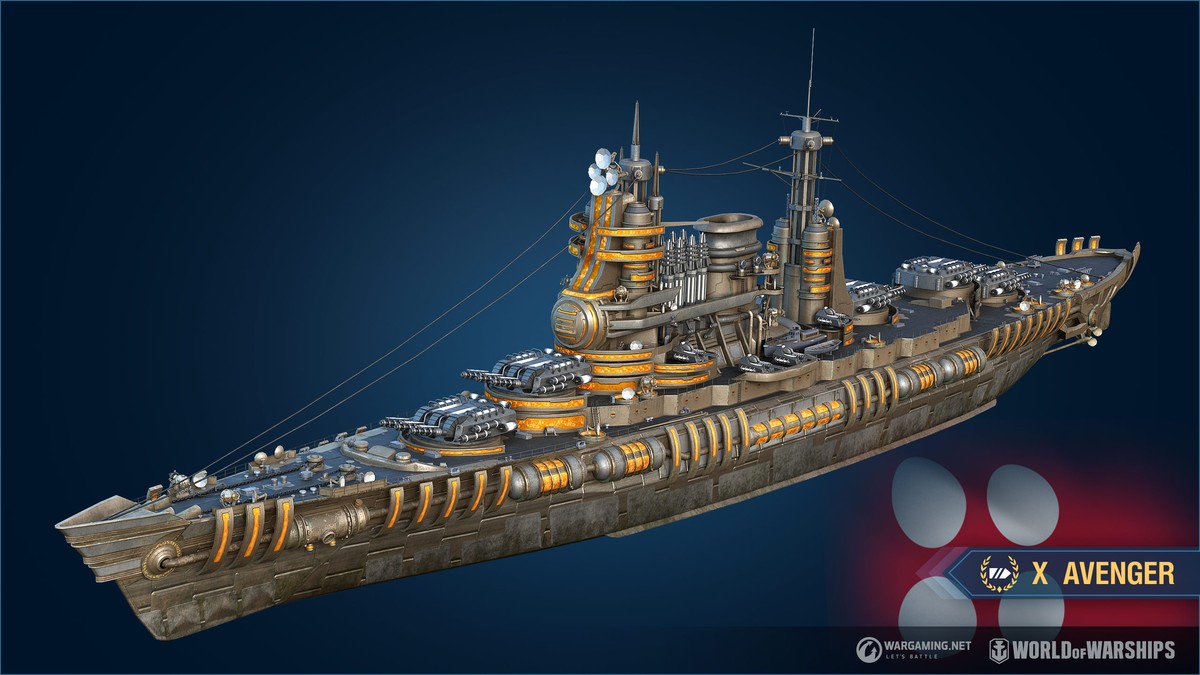 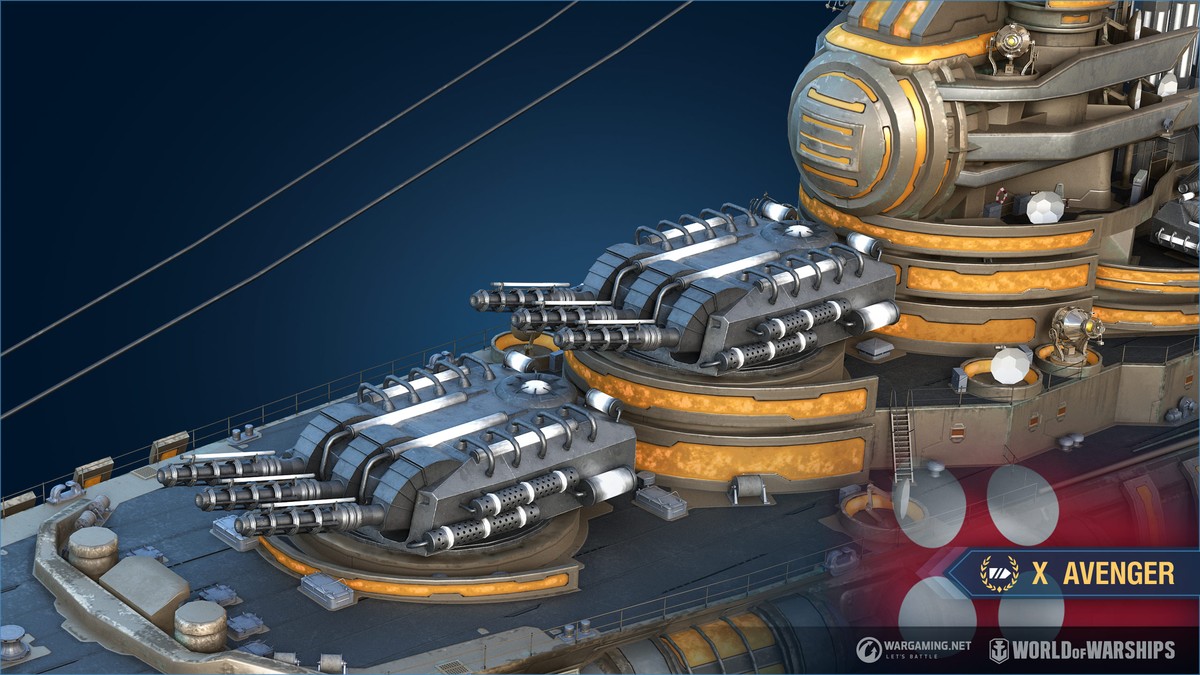 X Hector is the first ship to be capable of diving underwater temporarily. Thanks to this feature, she can quickly escape enemy fire by submerging, then suddenly resurface directly behind the enemy with her deadly laser weapon charged and ready to fire. 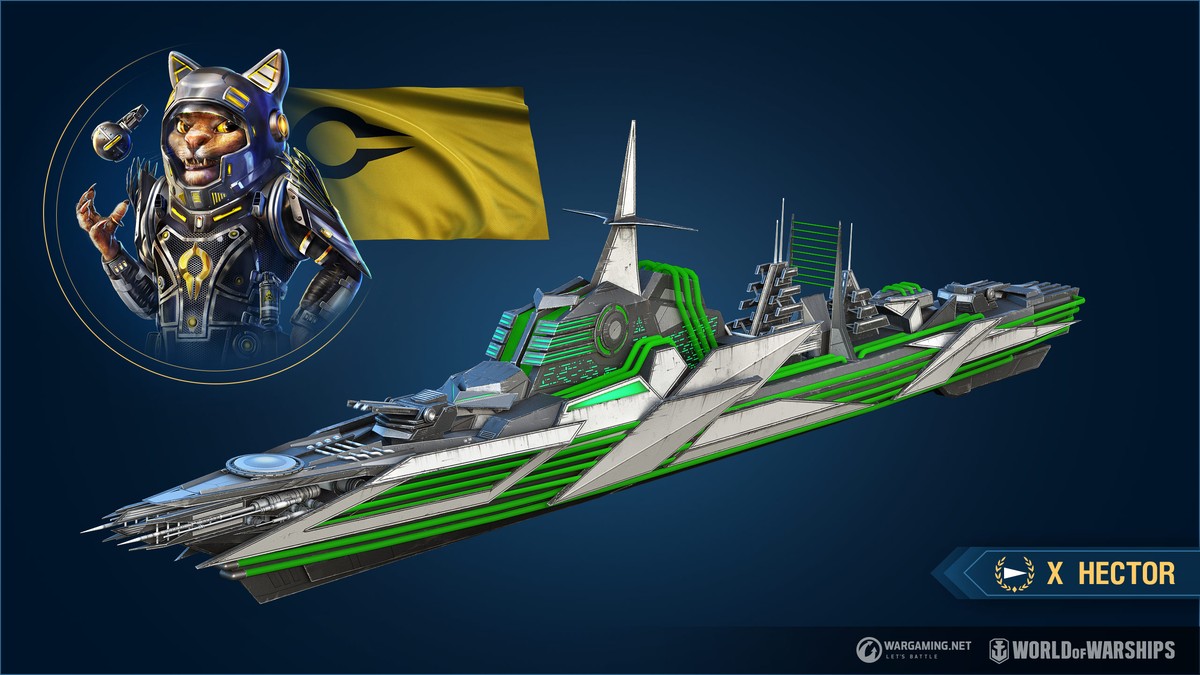 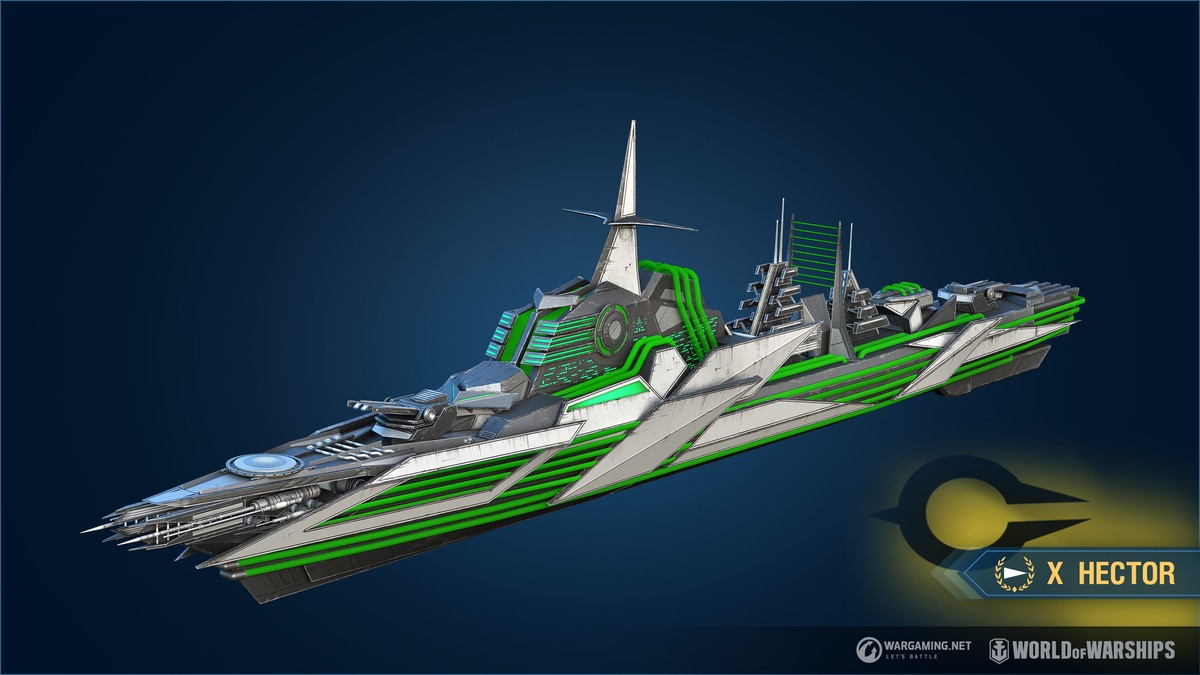 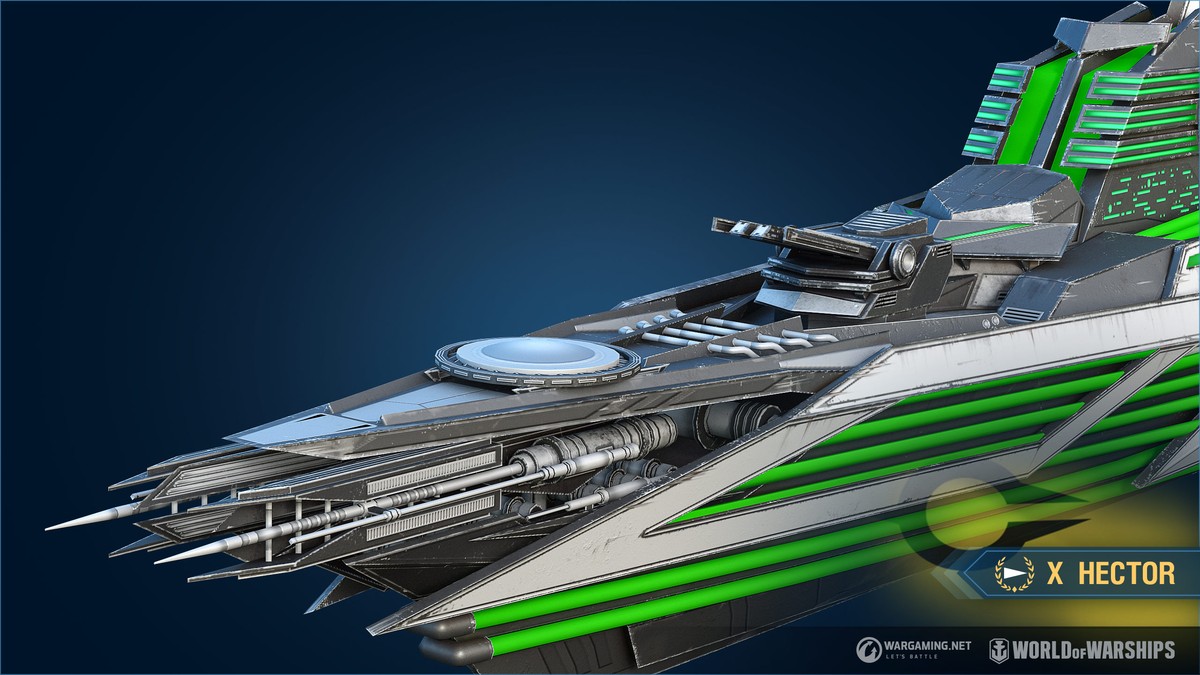 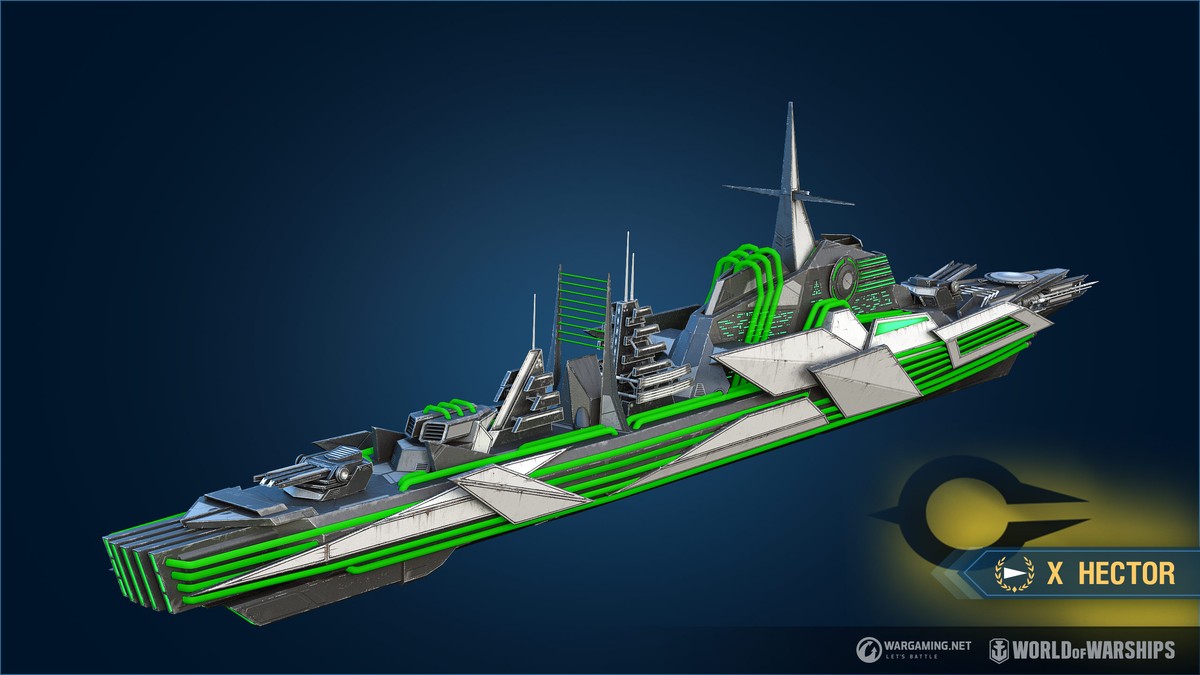 X Whirlwind is fast and has access to a wide selection of torpedo armament. Moreover, once you install a special module, she’ll be able to restore her own HP by inflicting damage to enemies. 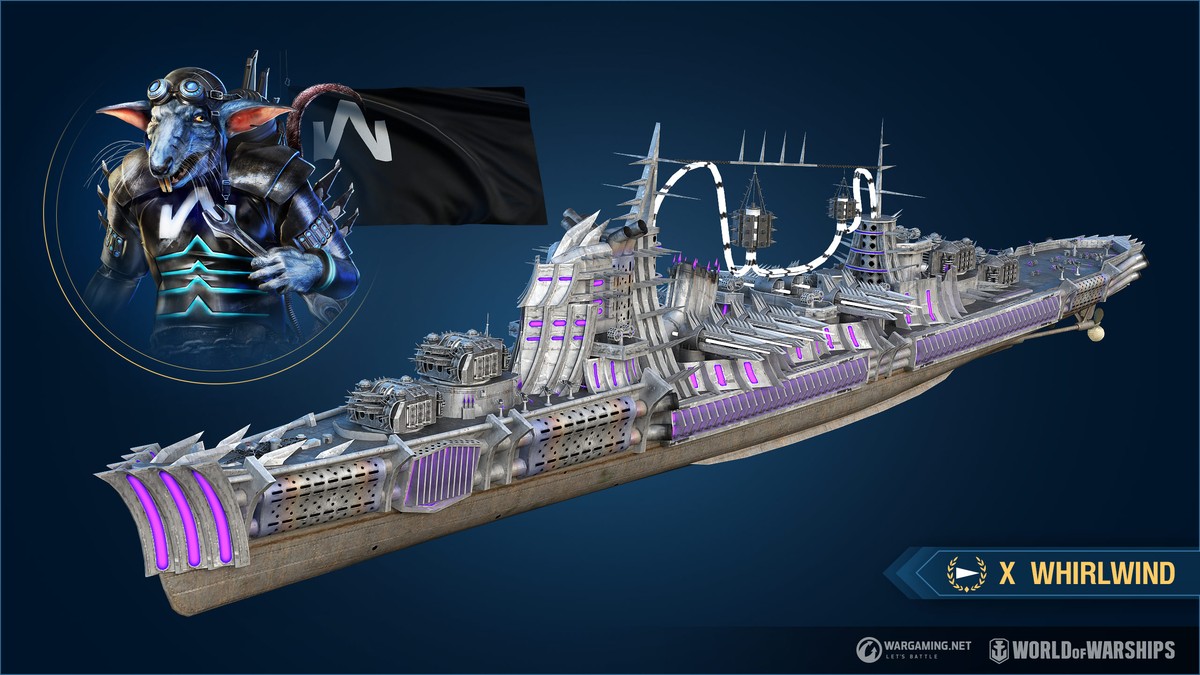 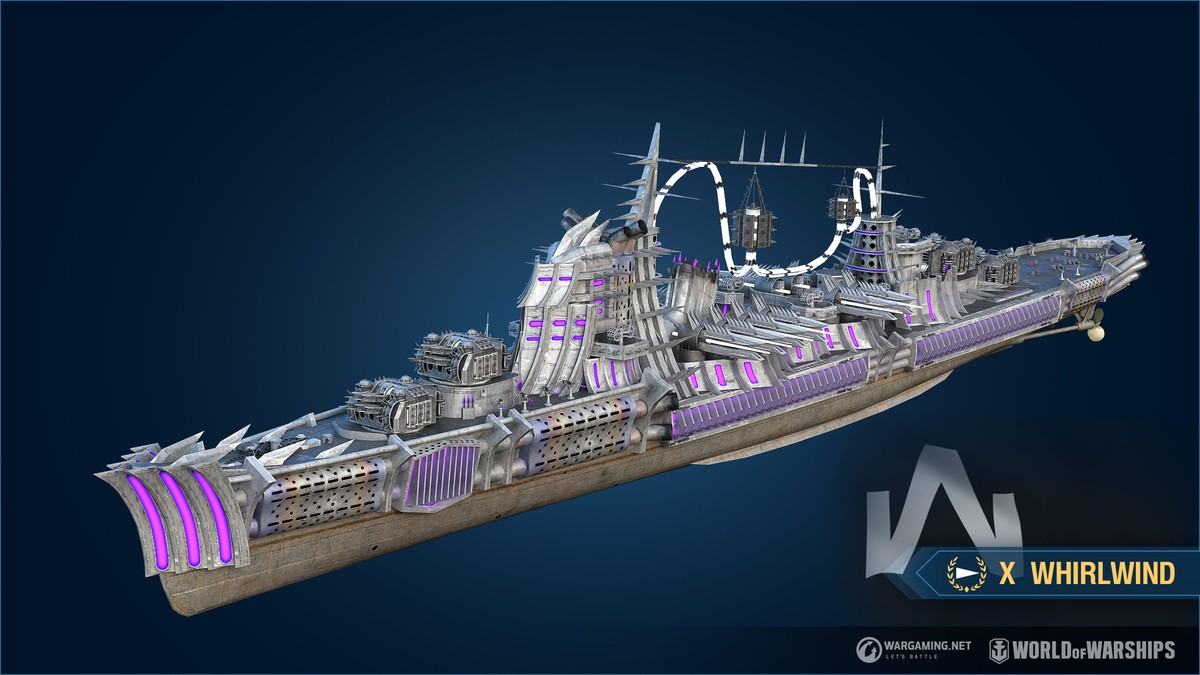 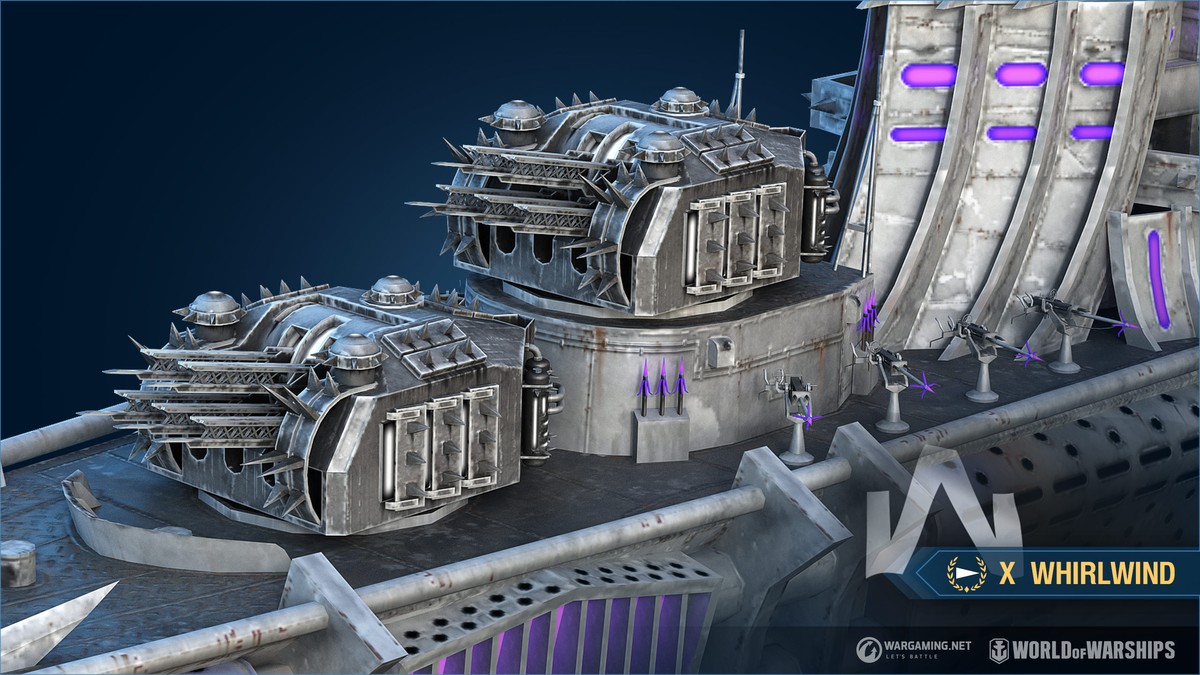 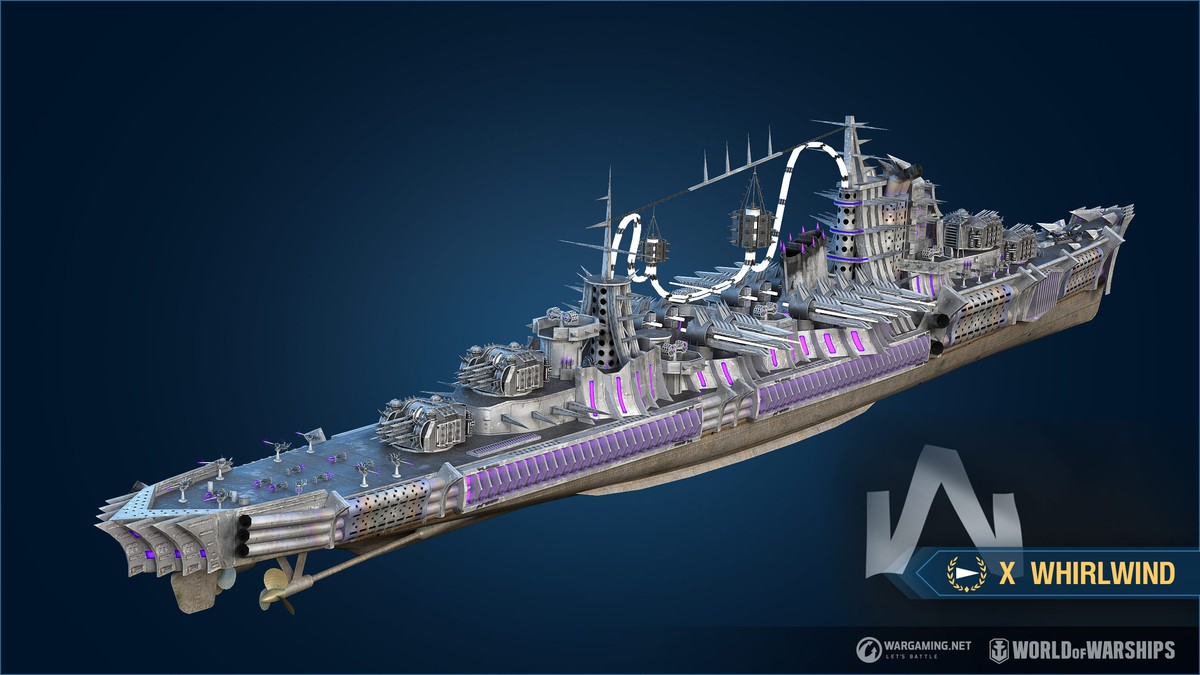